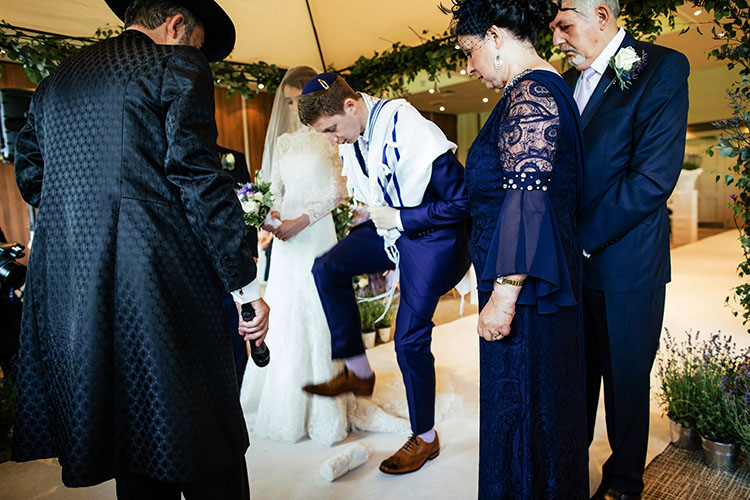 Whether you practice religion or not, taking part in Jewish wedding customs is definitely makes for an unforgettable event for a couples big day!

Jewish weddings are full of profound intentions and grand celebrations, which makes me eager to capture them.

They are always a lot of fun and I find them to be a lovely and enjoyable balance!

So let’s take a good look at some of the most important Jewish wedding traditions and Jewish marriage facts.

Of course, Judaism as a religion ranges from the most Orthodox and traditional Hasidic right through to the modern.

Just so that you won’t be caught off guard, so you are aware of what to anticipate beforehand because there are some important Jewish pre wedding traditions that are followed.

You’ll feel more comfortable celebrating Jewish weddings after doing so, and who knows?

Maybe the experience will inspire you to learn even more about the ancient Jewish wedding traditions, religion and culture.

So to kick things off, what were the Jewish wedding traditions in bible times that are still carried on to this day?

What are 5 rituals of a jewish wedding? 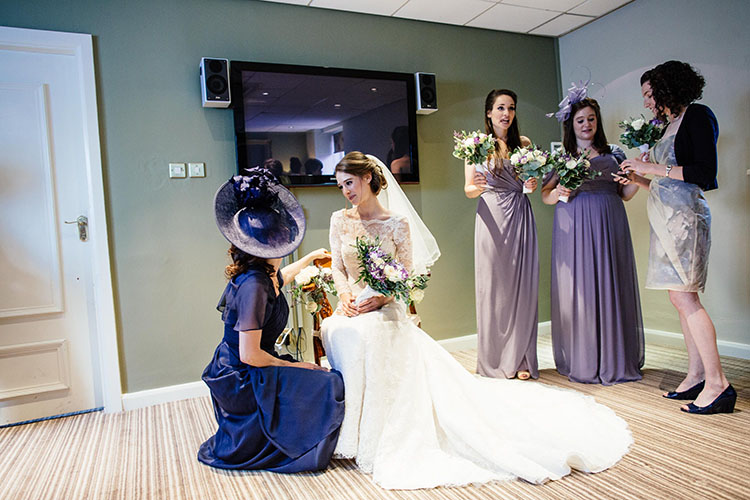 This was customarily the bride’s party, and her friends and family joined her to celebrate. This occurs prior to the ceremony, however it may now coincide with the Groom’s Table. 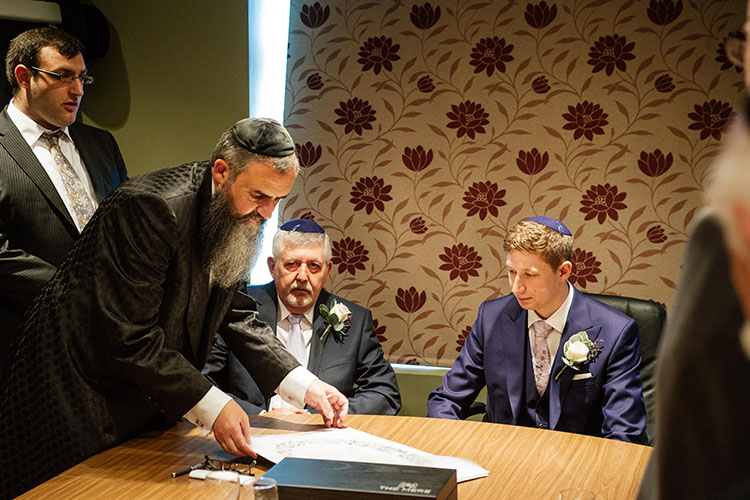 Pre-ceremony celebrations with food, drink and prayers are also one of the important biblical Jewish wedding traditions and held at The Groom’s Table.

The Tisch happens together with the groom and the groomsmen and is in readiness for the wedding. 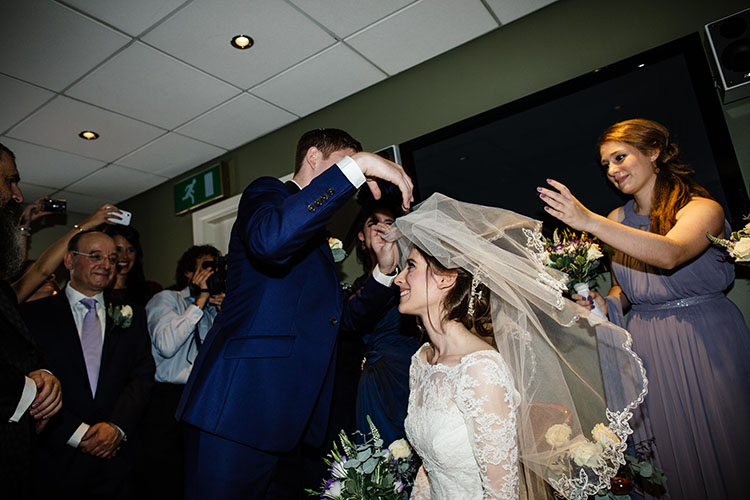 Bedeken is similar to the western marriage tradition of the first look and I think it’s one of the most lovely Jewish customs.

The bedeken is the unveiling of the bride by her future husband.

The bride’s face is reverently concealed by the groom’s veil during this private time.

The idea being that this represents that they are two distinctly unique people and that even in marriage, he cherishes her inner beauty.

This document is a very important part of Jewish civil law and is also one of the very oldest of traditional Jewish customs.

Within it, the Ketubah signals the obligations the bride and groom have to agree to one another.

It is a legal document that details different protections and rights, broadly similar to what is now known as a prenuptial.

Before the ceremony, the paper is read to the guests and signed in front of two witnesses.

5. Walking to the Chuppah 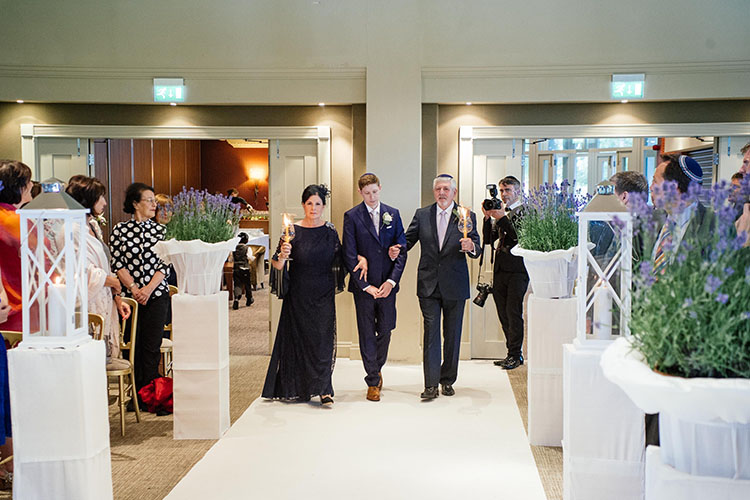 Walking to the chuppah (or the alter), the groom is seen here linking arms with his parents.

This is a powerful tradition which goes back millennia. Shortly after, the bride and the bride’s parents will follow suit. 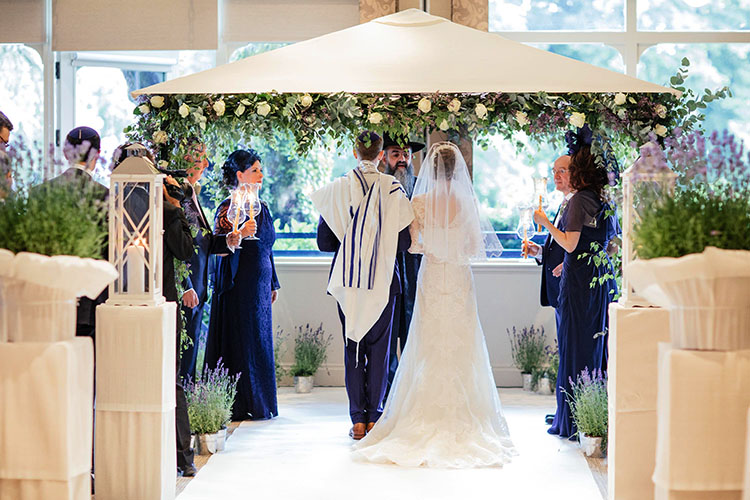 Much like all traditional weddings, the wedding ceremony will see the newlyweds exchange their vows under the chuppah.

That said, a chuppah, or Jewish altar, is very different to most other altars.

It is made with four corners with the idea being the chuppah acts much like a roof.

This is hugely symbolic as it symbolises the couple’s new married life together as one, in a nod to Jewish wedding traditions reform. 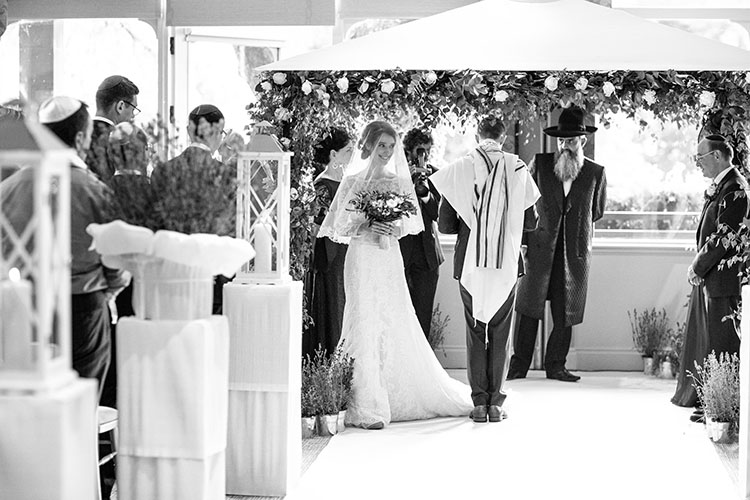 Over the centuries, circling has taken on a variety of shapes.

It was originally created to become a form of protection from evil.

The bride would traditionally go around her groom in a clockwise motion.

It is thought that this tradition may also represent the beginning of a new family, which then results in the pair circling around one another. 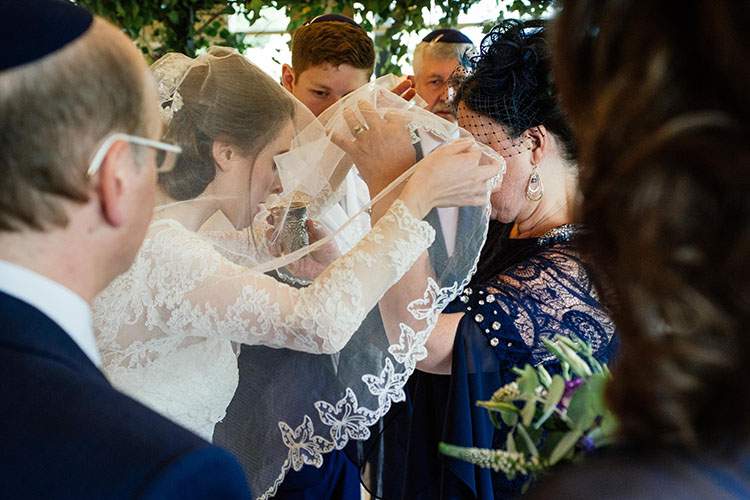 The Kiddushin (sometimes known simply as Erusin) is a tradition where the bride and groom share a glass of wine.

This is also where both the rings are consecrated.

This is the part of the ceremony where the couple are betrothed to each other.

The nissuin is the all important second part of the wedding ceremony in which the nuptials are read. 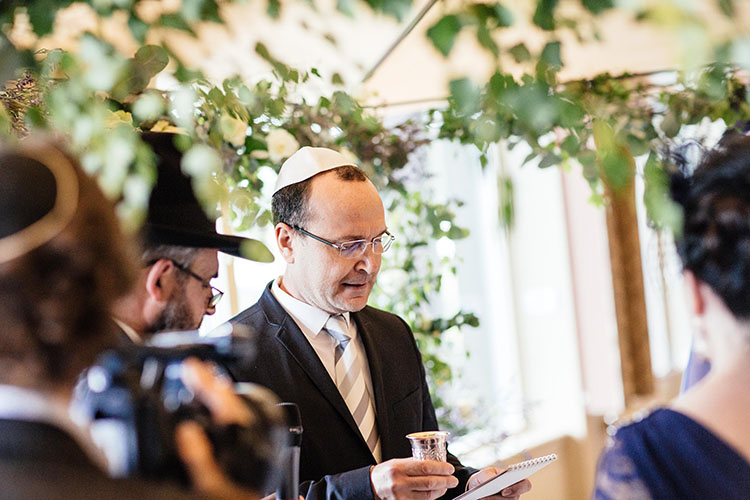 The Sheva B’rachot or seven blessings are a very old ritual in which friends and family give the couple their blessings.

Out of all the Jewish wedding traditions breaking glass is probably one of the most celebrated and well known of all.

Most people view breaking the glass as a celebration of the marriage although counterintuitively it is thought to symbolise the tearing down of the Temple.

The idea being that when the glass is smashed, it represents the notion that marriage can equally joyful and hard at times. 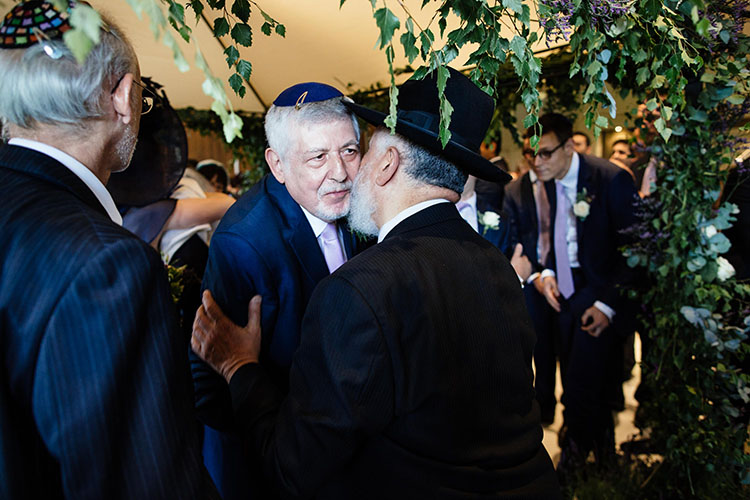 Translated directly from Yiddish, Mazel Tov is a bit like offering the couple sincere congratulations, or simply good luck!

Mazel Tov is not only heard at weddings but also at the coming of age rituals of Bar Mitzvahs and Bat Mitzvah.

The yichud is is a very important tradition in which the couple have time on their own to celebrate in private.

Traditionally the yichud lasts around 20 minutes although this isn’t set in stone.

It is during this time that the newlyweds eat their first meal as a married couple together.

The hamotzi is normally carried out by the male elders, by the uncles or grandfathers.

The essence of which concerns blessings over the traditional challah bread.

Another important Jewish tradition seen at wedding is the part of the day which is specifically kept for the parents of the very last unmarried child.

The parents are sat on chairs in the middle of the dance floor wearing crowns on their heads.

During this mizinke everyone dances round, congratulating the parents. 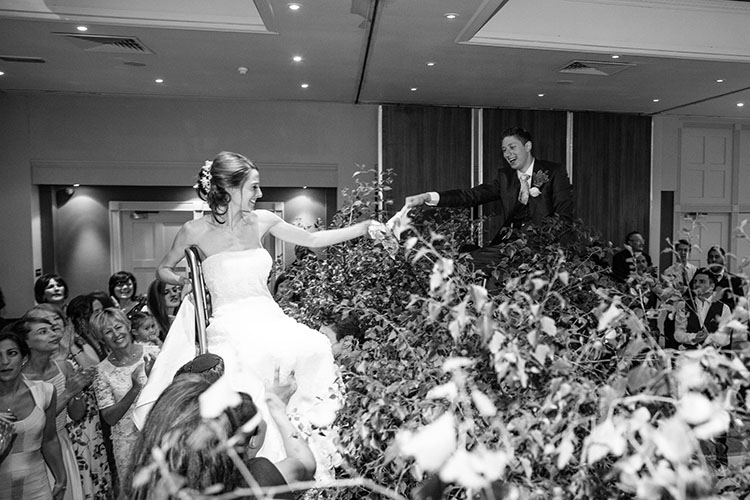 If you haven’t witnessed a hora at Jewish wedding reception before, prepare yourself, as it’s very fast and a lot of fun!

Everybody enjoys the hora when it comes to Jewish wedding night traditions – it’s definitely a feast for the eyes!!

Essentially all the guests dance around the couple in a circle.

Eventually both the bride and groom are lifted high into the air still sat in their chairs, right within the middle of the circle.

The Sherele is something else which is a lot of fun which you are likely to witness at a reception.

It is a dance which is best described as being a bit like a scissor step and much like a quadrille and it would be accompanied by traditional klezmer music (which by the way I absolutely LOVE!!).

For the uninitiated, Birkat Hamazon is a way of wrapping things up.

The reception meal is brought to an end with blessings from around the room, normally with a microphone so everyone can hear the prayers.

Once all of the blessings are spoken, wine in poured into three glasses.

The first two glasses are for the married couple whilst the third glass is poured to represent their marriage.

And it’s a big Mazel Tov to the newly married couple!

You are most welcome to view Lisa & Naphtali’s Jewish wedding Cheshire here.

As an established professional wedding photographer who happens to have shot a lot of Jewish wedding traditions, I am very happy to answer your questions.

It goes without saying that I would of course dearly love to photograph your big day! 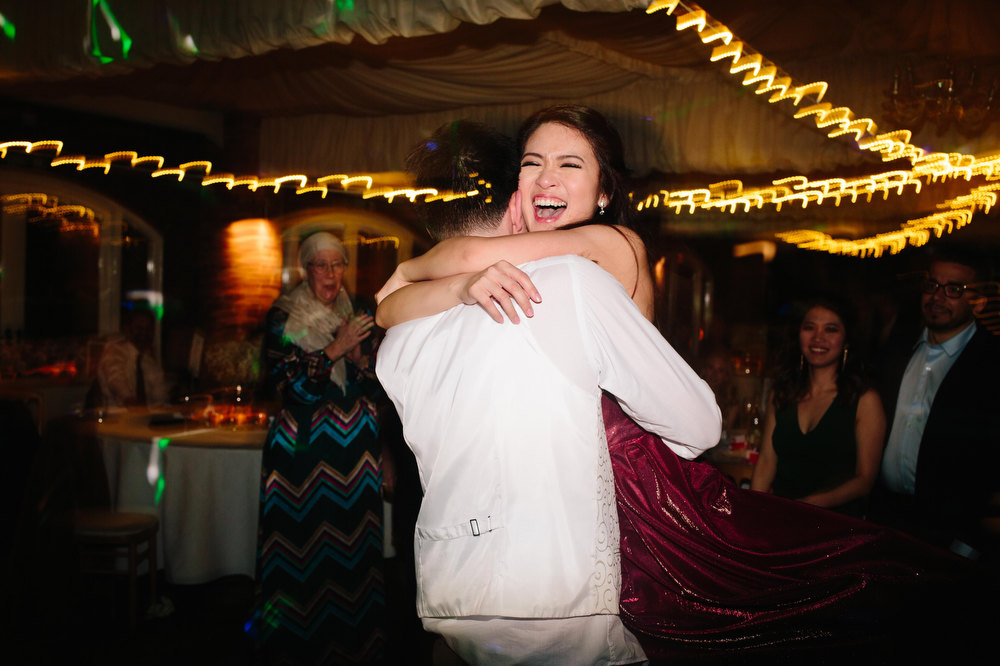 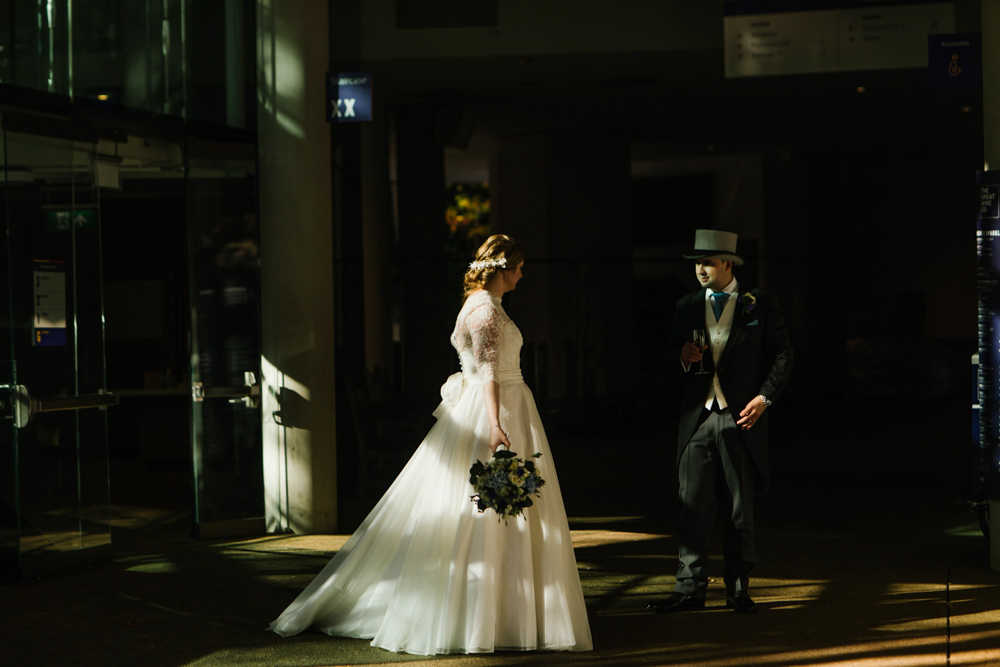 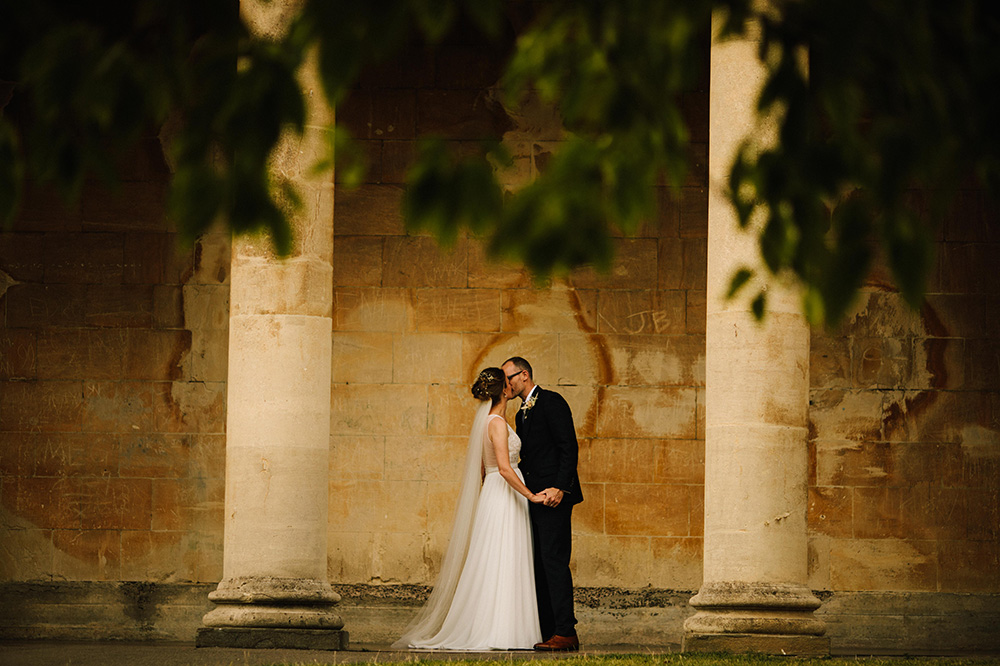 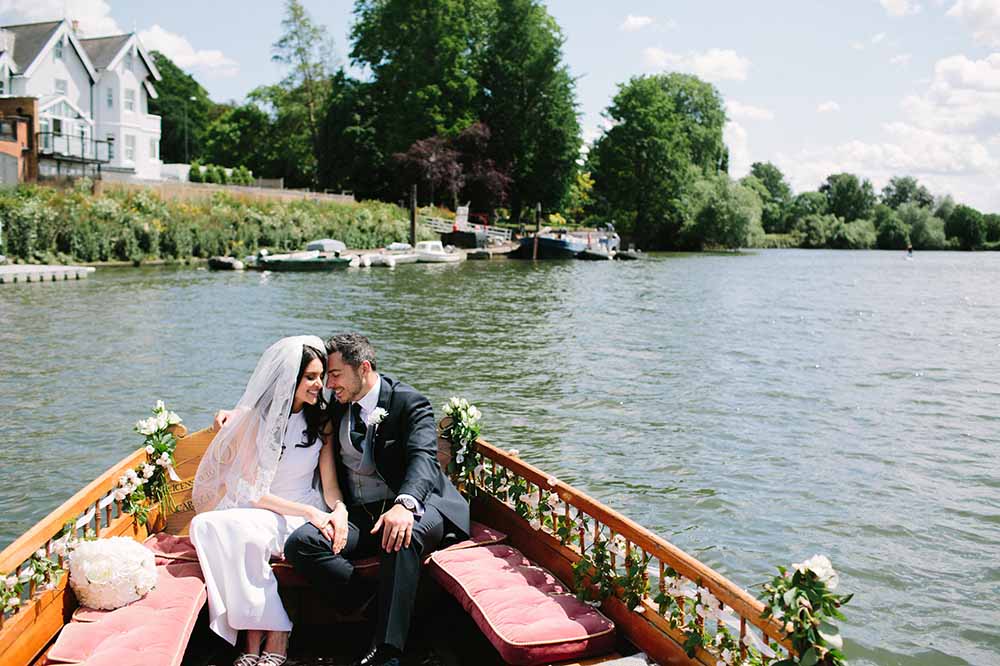 Is Bark any good for wedding photographers?
CONTINUE 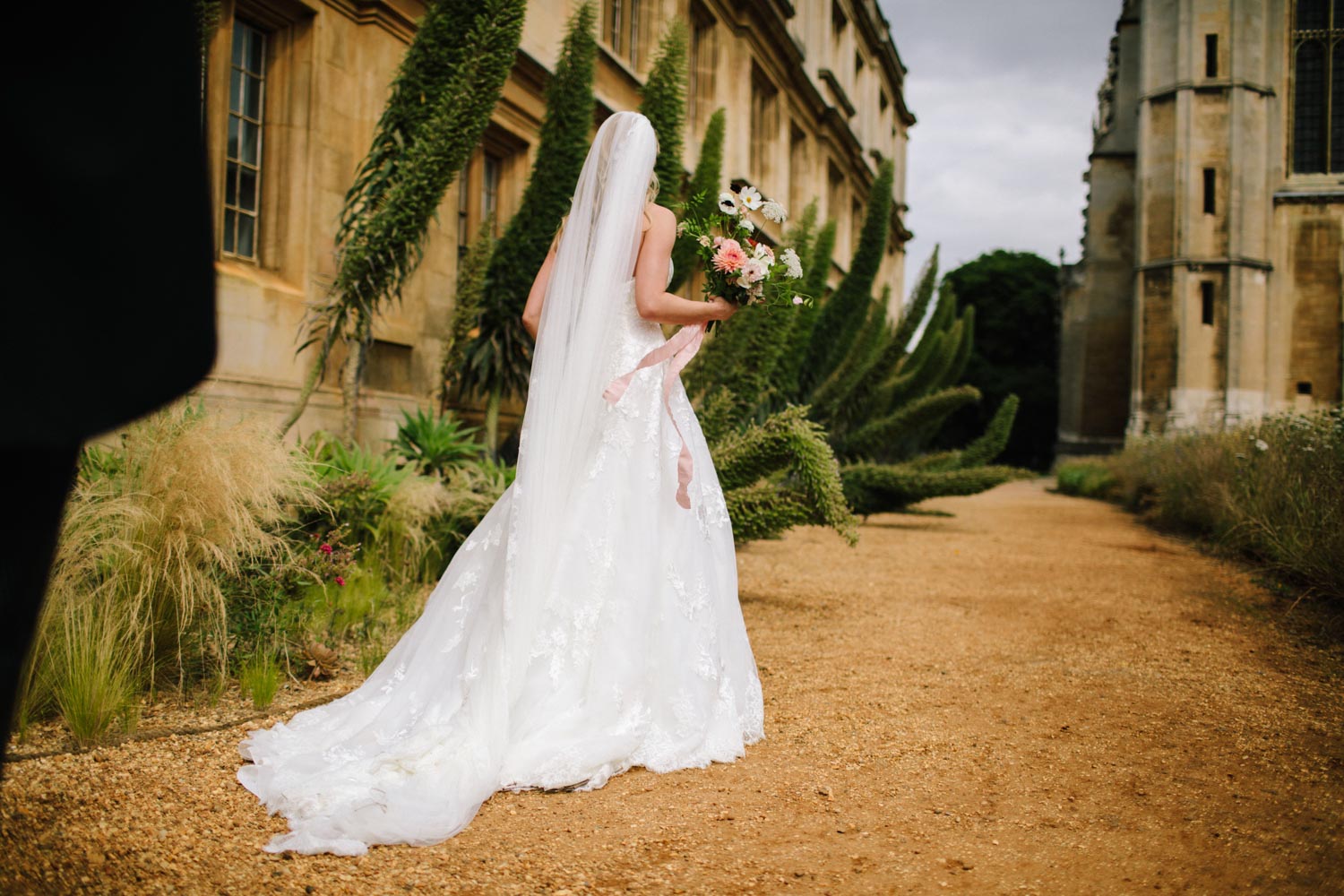 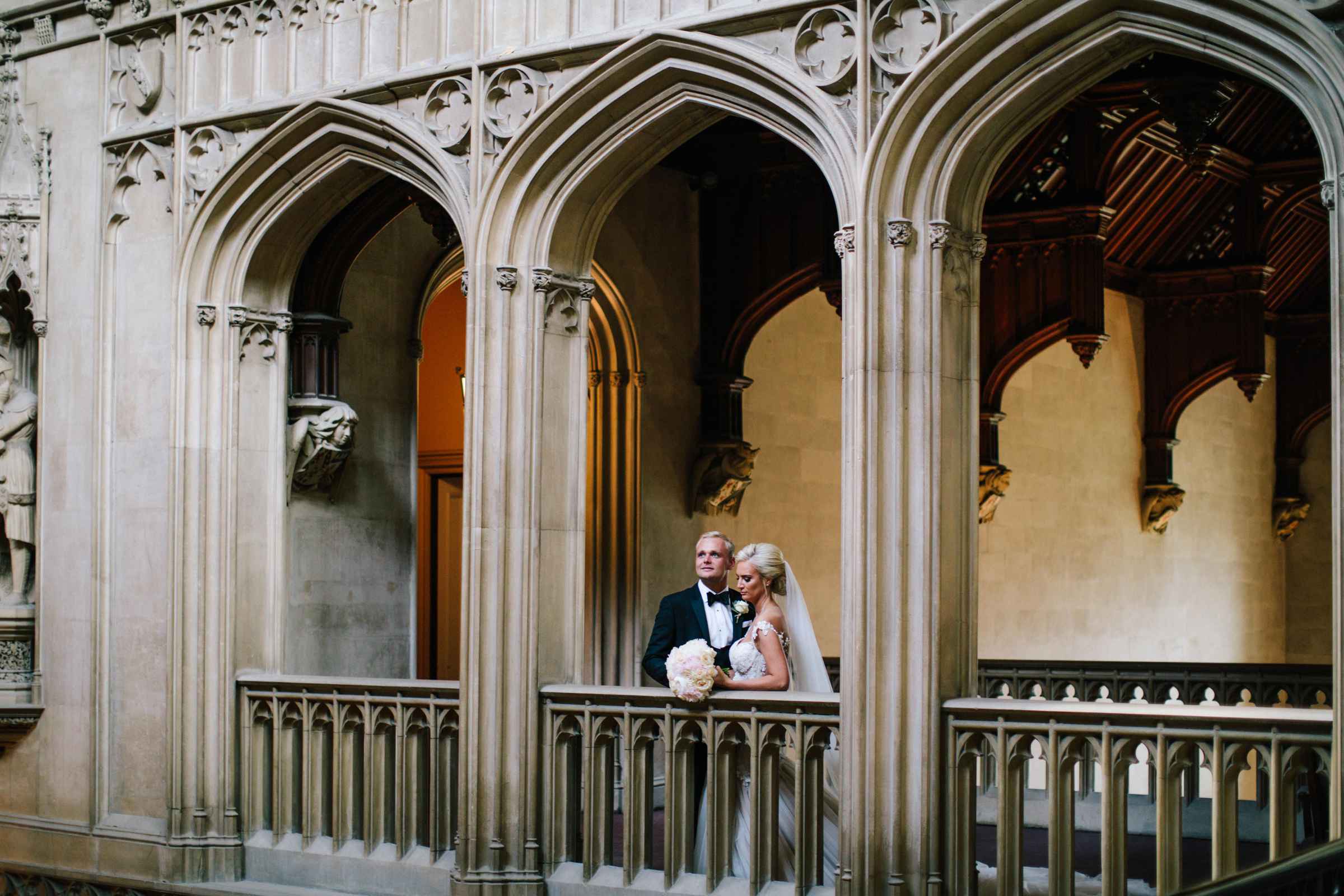 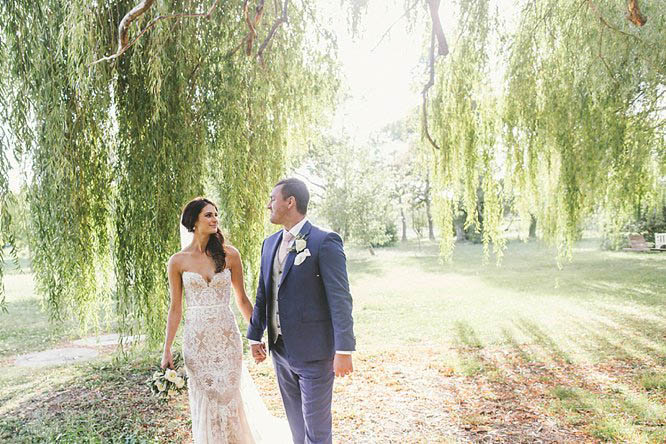 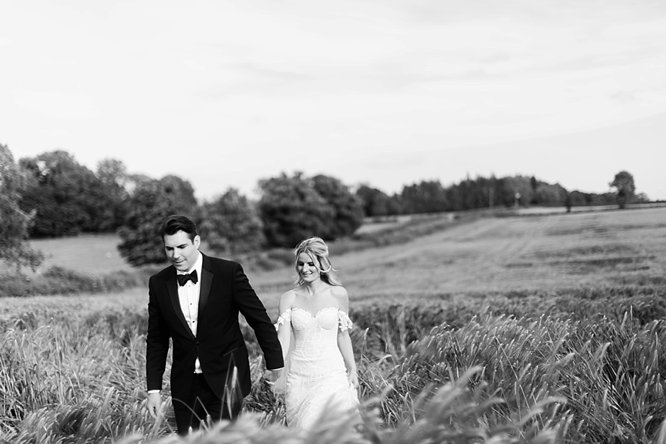 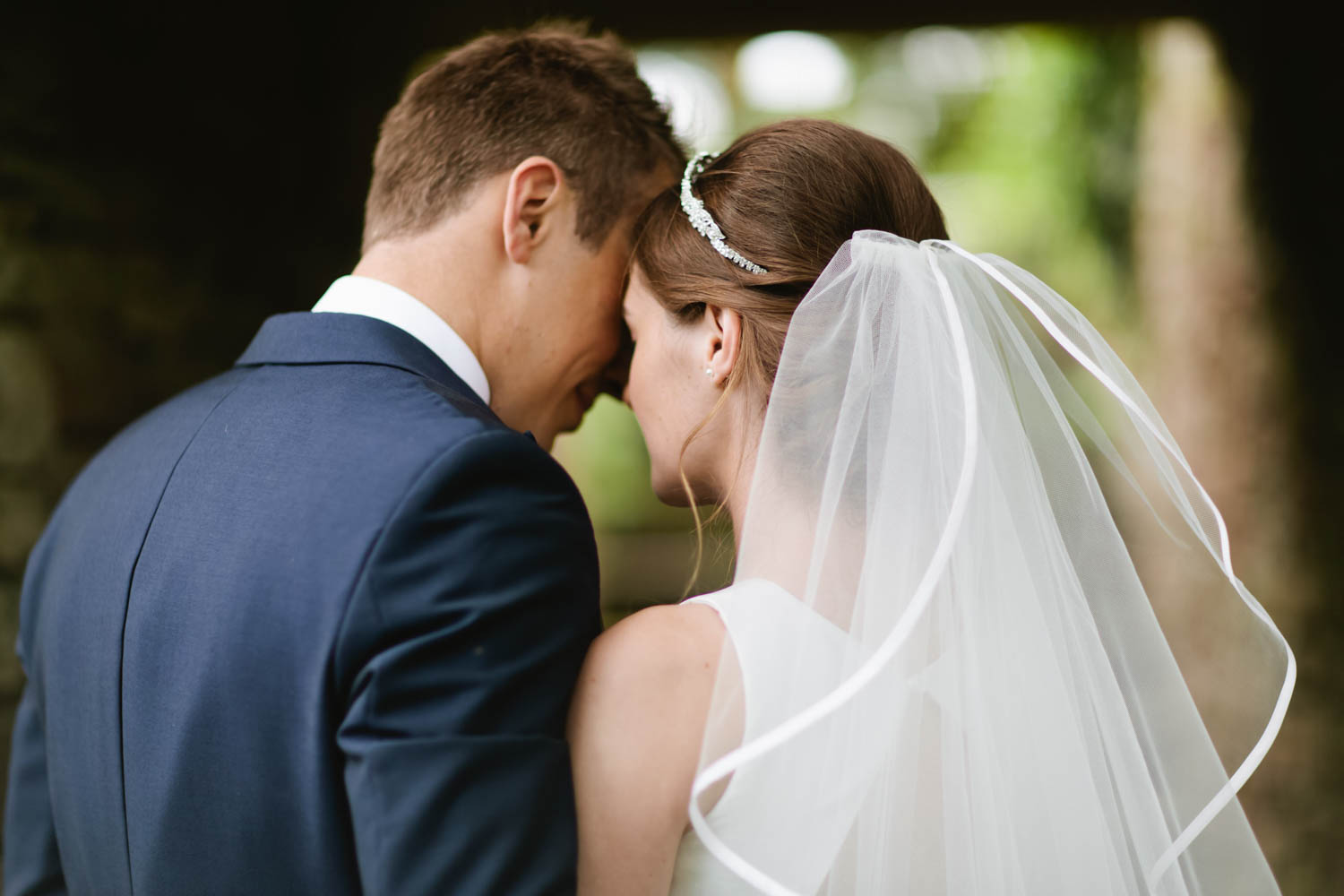 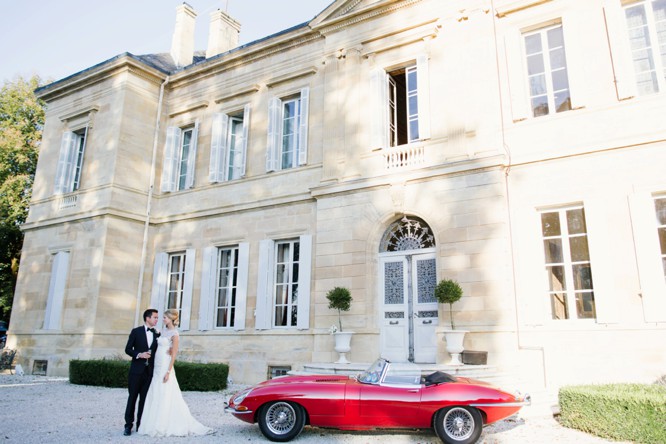